Infinite Rewind Cinematographic Apparatus is a super-projecting-machine built from 16mm projectors and with a life of its own. 16mm film is turned into a sculptural piece, changing its shape according to the reading of the movies.

The projectors are programmed to create films by entering the heart of one of the most mysterious mathematical entities, Pi. On the center of the piece is a control screen, is responsible for triggering the reading of the film on the 16mm projectors, using small motors placed on the projectors to automatically turn them on or off. This screen is inspired by CERN control screens.

The aim in this artpiece is to work at the different levels of cinematographic process at the same time. More than producing a film, it was intended to embrace the whole cinematoraphic process by considering it as an autonomous device of recording and projecting. The use of 16mm film with a tape recorder is meant to rethink the foundations of cinema by confronting its old form to new media.

This artwork made in collaboration with filmmaker Sophie Dascal. The 16mm films were recorded at CERN with main topic of antimatter. 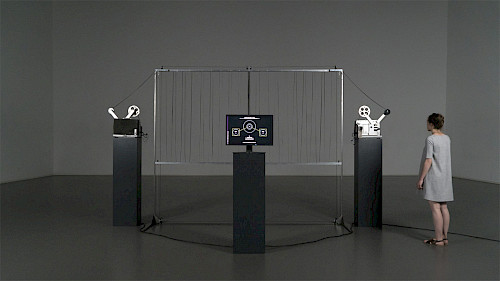